A little over a month after releasing Bevy 0.2, and thanks to 59 contributors, 122 pull requests, and our generous sponsors, I'm happy to announce the Bevy 0.3 release on crates.io!

For those who don't know, Bevy is a refreshingly simple data-driven game engine built in Rust. You can check out Quick Start Guide to get started. Bevy is also free and open source forever! You can grab the full source code on GitHub.

Here are some of the highlights from this release:

You can try out the Bevy Android example by following the instructions here. While many things work, please note that this is very hot off the presses. Some features will work and others probably won't. Now is a great time to dive in and help us close the gaps! 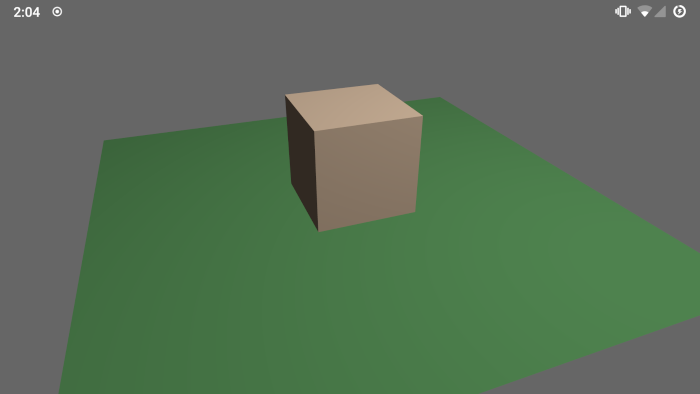 This was a massive group effort that spanned multiple projects:

Bevy can now run on iOS!

You can try out the Bevy iOS example by following the instructions here. This one is also hot off the presses: some features will work and others probably won't.

This was another large group effort that spanned multiple projects:

authors: @mrk-its (and ported to the new AssetIo by @cart)

@mrk-its has been hard at work on expanding Bevy's WASM support. In this release we landed WASM asset loading. You can now load assets when you publish to WASM just like you would on any other platform:

If the asset hasn't already been loaded, this will make a fetch() request to retrieve the asset over HTTP.

@mrk-its has also been building a custom WebGL2 bevy_render backend. It is already pretty usable, but its not quite ready yet. Expect more news on this soon!

Bevy now has support for touches:

Assets are now automatically freed when their "handle reference count" reaches zero. This means you no longer need to think about freeing assets manually:

In past releases, AssetLoaders could only produce a single asset of a single type. In Bevy 0.3, they can now produce any number of assets for any type. The old behavior was extremely limiting when loading assets like GLTF files, which might produce many meshes, textures, and scenes.

Sometimes you only want to load a specific asset from an asset source. You can now load sub assets like this:

The AssetServer is now backed by the AssetIo trait. This allows us to load assets from whatever storage we want. This means on desktop we now load from the filesystem, on Android we use the Android Asset Manager, and on the web we make HTTP requests using the fetch() api.

Assets can now depend on other assets, which will automatically be loaded when the original asset is loaded. This is useful when loading something like a "scene" which might reference other asset sources. We utilize this in our new GLTF loader.

This might rustle some feathers, but AssetServer::load_sync() had to go! This api wasn't WASM friendly, encouraged users to block game execution for the sake of convenience (which causes "hitching"), and was incompatible with the new AssetLoader api. Asset loading is now always asynchronous. Users of load_sync() should instead load() their assets, check load status in their systems, and change game state accordingly.

Up until this point, the GLTF loader was painfully limited. It could only load the first mesh with a single texture in a GLTF file. For Bevy 0.3, we took advantage of the asset system improvements to write a new GltfLoader that loads GLTF files as Bevy Scenes, along with all meshes and textures in the files. 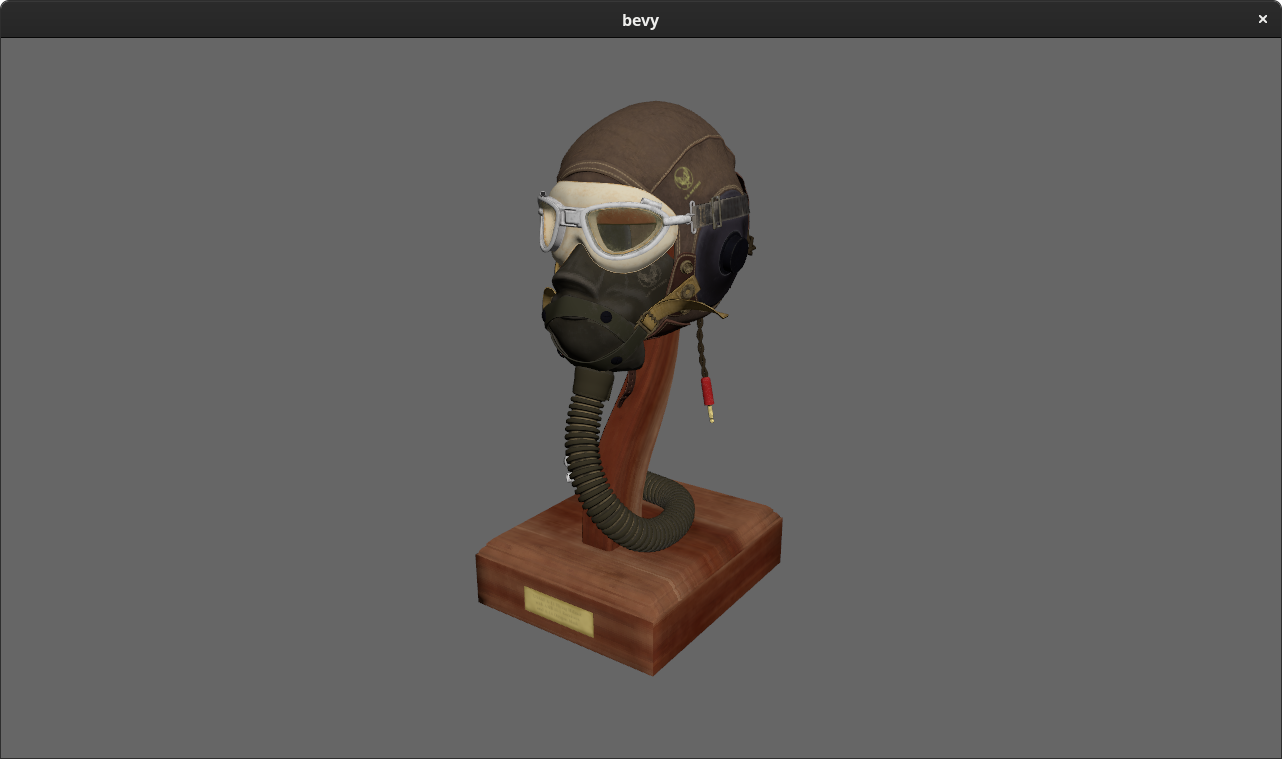 Here is the complete code for a system that loads a GLTF file and spawns it as a scene:

In this release I finally was able to remove the one thing I truly despised in Bevy ECS. In previous versions of Bevy, iterating over the components in a Query looked like this:

Similarly, retrieving a specific entity's component's looked like this:

Why did this take so long? Why would removing a single &mut be hard?

It's a long story! In summary:

Fortunately we finally found ways to solve all of these problems. The newly added QuerySets allow us to completely remove the locks (and wrapper types). And by completely rewriting QueryIter we were able to avoid the performance hit that removing the wrapper incurred. Read on for the details!

Bevy ECS is now completely lock free. In Bevy 0.2, we made direct World access and "for-each" systems lock free. This is possible because the Bevy ECS scheduler ensures that systems only run in parallel in ways that respect Rust's mutability rules.

We couldn't remove locks from Query systems because of systems like this:

The locks ensured that the second q1.get_mut(some_entity) access panicked, keeping us nice and safe. In Bevy 0.3, a system like conflicting_query_system will fail when the schedule is constructed. By default, systems cannot have conflicting queries.

However there are some cases where a system needs conflicting queries to do what it needs to do. For these cases, we added QuerySets:

By putting our conflicting Queries in a QuerySet, the Rust borrow checker protects us from unsafe query accesses.

Because of this, we were able to remove all safety checks from query.iter() and query.get(entity), which means these methods are now exactly as fast as their World counterparts (which we made lock-free in Bevy 0.2).

Bevy had a number of nice performance improvements this release:

Getting an Entity's Component (per 100k, in milliseconds, smaller is better)

Note: these numbers are for getting a component 100,000 times, not for an individual component lookup

This is where the big wins were. By removing locks and safety checks from Query systems, we were able to significantly reduce the cost of retrieving a specific entity's component from within a system.

I included a comparison to Legion ECS (another great archetypal ECS with a parallel scheduler) to illustrate why Bevy's new approach is so cool. Legion exposes a direct "world like" api (called a SubWorld) in its systems. The SubWorld's entry api cannot know ahead of time what types will be passed into it, which means it must do (relatively) expensive safety checks to ensure the user doesn't request access to something they shouldn't.

Bevy's scheduler pre-checks Queries once ahead of time, which allows systems to access their results without any additional checks.

The test was to lookup (and modify) a specific entity's component 100,000 times on each system iteration. Here is a quick rundown of how these tests were performed in each case:

It's worth noting that using query.get_component::<T>(entity) instead of query.get(entity) does require safety checks, for the same reason the legion entry api does. We cannot know ahead of time what component type a caller will pass into the method, which means we must check it to make sure it matches the Query.

Additionally, here are some relevant ecs_bench_suite results (omitted benchmarks had no significant change):

Some resource types cannot (or should not) be passed between threads. This is often true for low level apis like windowing, input, and audio. It is now possible to add "thread local resources" to the Resources collection, which can only be accessed from the main thread using "thread local systems":

To allow multiple concurrent reads of Queries (where it is safe), we added separate query.iter() and query.iter_mut() apis, as well as query.get(entity) and query.get_mut(entity). Queries that are "read only" can now retrieve their results via an immutable borrow.

Here is an example that illustrates how to define a custom shader that consumes a mesh with an added "vertex color" attribute. 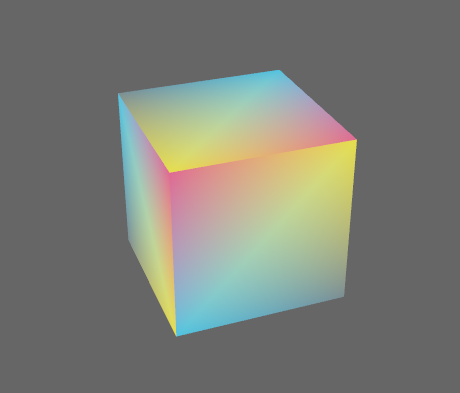 Rendering meshes often involves using vertex "indices" to cut down on duplicate vertex information. Bevy used to hard code the precision of these indices to u16, which was too small for some cases. Now render pipelines can "specialize" based on a configured index buffer, which now defaults to u32 to cover most use cases.

Transforms are important to get right. They are used in many slices of the engine, user code touches them constantly, and they are relatively expensive to compute: especially transform hierarchies.

In the last release, we vastly simplified Bevy's transform system to use a consolidated Transform and GlobalTransform instead of multiple separate Translation, Rotation, and Scale components (which were synced to Transform and GlobalTransform). This made the user-facing api/dataflow simpler, as well as the underlying implementation. The Transform component was backed by a 4x4 matrix. I pressed the big green "merge" button ... happy that we had solved the Transform problem once and for all!

It turns out there was still more work to be done! @AThilenius pointed out that using a 4x4 matrix as the source of truth for an affine transform accumulates error over time. Additionally, the Transform api was still a little cumbersome to use. At the suggestion of @termhn we decided to investigate using a "similarity" as the source of truth. This had the following benefits:

We collectively decided this was a good path forward and now we have a re-rewrite that is even better. Yes this is another breaking change, but thats why we label Bevy as being in the "experimentation phase". Now is the time to break things as often as possible to ensure that we find good apis that will stand the test of time.

This is what the new Transform api looks like in a Bevy ECS system:

Compared to the last version this is easier to use, more correct, and should also be slightly faster.

If you've used Bevy, you're probably familiar with this part of App initialization:

This adds the plugins for all of the "core" engine functionality (rendering, input, audio, windowing, etc). It was straightforward, but also very static. What if you don't want to add all of the default plugins? What if you want to create your own custom set of plugins?

To resolve this, we added PluginGroups, which are ordered collections of plugins that can be individually enabled or disabled:

Bevy provides a backend-agnostic windowing api. Up until this point, window settings could only be set once at app startup. If you wanted to set window settings dynamically, you had to directly interact with window backends (ex: winit).

In this release we added the ability to dynamically set window properties at runtime using the Bevy window abstraction:

The bevy crate documentation search function now returns results for all sub-crates (like bevy_sprite). Due to how documentation is generated for re-exported crates, by default the bevy search index only covered the "prelude". @memoryruins found a way to fix this problem by creating new modules and exporting the contents of each crate within those modules (as opposed to aliasing the crates).

A huge thanks to the 59 contributors that made this release (and associated docs) possible!